We received the following letter a few weeks ago from Rev. Jim Nelson, a priest in Texas. As we reflect on themes of hospitality in our Lenten Season of Prayer: 40 Days in the Desert series, we wanted to share Jim’s story here.

I’m an Episcopal priest in “The Valley,” as this part of Texas is called. We’re way down south on the border with Mexico, in the heart of the Rio Grande Valley. Reynosa is just across the river from us, and is our sister city. Though “Winter-Texans” love it here, and flock in droves to enjoy our mild winters, the rest of the state of Texas sees us only as the necessary part to travel through to get to the beaches of South Padre Island. We live in an in-between place—not Mexico but  not the United States exactly, either. We’re simply The Valley.

Because of our location and climate, the Rio Grande Valley is home to many people living between the layers of society. I meet a lot of them at my church, Saint John’s.  I first met Pachuco (not his real name) one evening here at the parish, while I was checking the grounds and locking up for the night.  Saint John’s has a beautiful garden in the center of the parish grounds, and as I was coming around one of the hedge-lined walkways, I suddenly came face to face Pachuco. He had a bandana around his forehead, the clothes he was wearing were about 10 sizes too big, he was sporting an array neck tattoos, complete with a Fumanchu-style mustache and soul patch just under his bottom lip.

His first words to me were, “I’m not here to hurt ya, Boss.”  From that statement, I figured it was likely he might have indeed hurt people before. When he called me, “Boss,” I was pretty sure he had probably also served time in prison. I ended up finding out I was right on both counts. He looked like an aging gang-banger from East LA, which is really just a part of who he is.

Pachuco wanted money for a place to stay (the first of many such requests), and after talking with him some more I invited him  back the next day to see if we could come up with some solutions for him. He did return,  and I gave him a small check from my clergy discretionary account. He had the proper ID to cash a check, so I sent him to the bank that’s right next door to us. About five minutes later, the bank called to ask if I had written a check to this man—I could hear the incredulity in their voice.

That was the start of what is still an on-going relationship between this guerro (white guy) and a displaced gang-banger.

Over the course of five years, I’ve had countless talks with Pachuco. He counts me as a dear friend, even though I seldom tell him what he wants to hear. He could change —find “amendment of life,” if he truly wanted that.  Of course, we all could. I’ve also made friends with another ex-gangbanger who teaches college. I invited him and Pachuco out to lunch with me, in order that the professor might inspire Pachuco to change.

I’ve prayed with and for Pachuco countless times. I’ve purchased clothes for him that might be a little more professional-seeming in interviews, so Pachuco could look more like the other viable applicants, and actually get a job.  He’s come to church at Saint John’s  a few times. I love Pachuco, and he frustrates me like none of my other regular visitors who come seeking assistance and prayer. The police regularly pick him up for criminal trespassing. I know he is capable of doing differently, but he always justifies not shedding the vestiges of his old life.  Even his clothes have captured him, serving an identity that doesn’t particularly serve his best interests, or who he really is as a beloved child of God.

I realize that how I feel with Pachuco is how God must feel with humanity—with you and with me.

I care about Pachuco. God cares more about all of us. I see the potential in Pachuco for a contented and joyful life—and I want that for him. God sees that in me and in you, too. And just like us, Pachuco fearfully clings to his old identity—as though that truly is who he is. So do we. Pachuco claims to want more, even though he won’t do the one thing that will allow him to cross over into a better life.  He’s afraid of losing himself and the identity he’s clung to all of these years. He holds back. So do we. 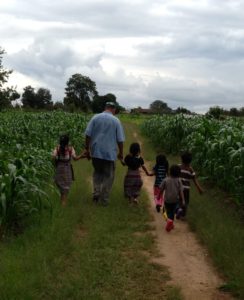 Jim Nelson is the rector of St. John’s Episcopal Church in McAllen, TX.