Today is the Feast of St. Matthew, a tax collector and unlikely follower of Jesus. In honor of this saint, we asked Julie: How have you heard good news from someone—or shared good news with someone—in an unexpected moment? This is her story.

In 1993, I was an experienced federal prosecutor charged with investigating organized crime in Florida. As part of my duties, I was assigned to meet, debrief, and if possible, prepare two young Colombian sex workers to testify as cooperating witnesses in a drug trafficking trial.

When I met the two women, they were hardened and seemed unwilling to tell me anything. Over several months, I noticed their attitudes changing as they gradually opened up to me about their children and how they supported them through sex work and later smuggling if they were pregnant, all at the direction of the drug cartels. They were hesitant to testify and afraid their children in Colombia would be harmed.

One day, their attitude changed and their fears disappeared. They arrived at their debriefing in almost an ecstatic state of joy. They told me they had accepted Jesus Christ as their Savior, and they knew if they stayed true to their faith and told the truth at the trial all would be well.

I am ashamed to admit that I thought this sudden conversion was a convenient ruse to gain favorable treatment. After all, I had witnessed far too many jail house conversions for just such a purpose. I said as much to them and they just smiled, saying they understood my doubts. After all, they had also believed that Jesus would never love sinners like them. 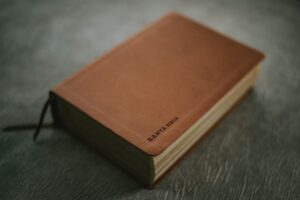 The months passed and the women continued to provide information. During trial, an FBI agent showed me the Spanish-language Bibles the women kept with them in jail. Inside, I saw that prisoners and prison guards had signed the Bibles asking for and offering prayers and thanking the women for helping them believe that Jesus would forgive their sins.

The truth could no longer be denied. I was the Pharisee questioning who was “worthy” of God’s love while those young women simply answered his call. They spoke of his love even when I wouldn’t listen. They reminded me of his words, “For I have come not to call the righteous, but sinners.”

More from our ministry:

Read our newest release, on wealth and poverty: The Unjust Steward