We’re excited to share that the brackets for the hottest tournament of the spring—that’s right, Lent Madness—have now been announced! Get ready to separate the saints from the aints. 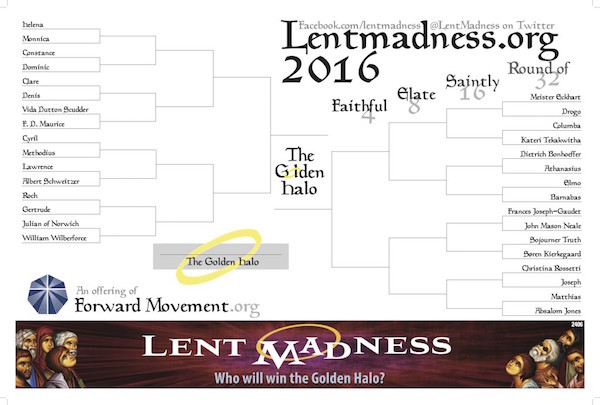 New to Lent Madness? Here’s how it works: on the weekdays of Lent, information is posted at www.lentmadness.org about two different saints. Each pairing remains open for 24 hours as participants read about and then vote to determine which saint moves on to the next round. Sixteen saints make it to the Round of the Saintly Sixteen; eight advance to the Round of the Elate Eight; four make it to the Faithful Four; two to the Championship; and the winner is awarded the Golden Halo.

The first round consists of basic biographical information about each of the 32 saints. Things get a bit more interesting in the subsequent rounds as we offer quotes and quirks, explore legends, and even move into the area of saintly kitsch.

For those seeking an advanced list of all 32 first round bios along with a personal full-color bracket, the Saintly Scorecard: The Definitive Guide to Lent Madness 2016 will be available through Forward Movement in January.

And check out Tim Schenk and Scott Gunn’s All Brackets’ Day video, in which they highlight some of the unique battles to come in Lent Madness 2016.

Like that other March tournament, there will be drama and intrigue, upsets and thrashings, last-minute victories and Cinderellas. Unlike professional and collegiate sporting events, there is no admission cost for Lent Madness, but souvenirs are available in the “Lentorium” part of the Lent Madness website.

And if you’d like to play Lent Madness with a group or congregation, pick up an oversized Lent Madness bracket poster to track the results (perfect for a parish hall).