Fourteen-year old Jack Whittaker has been programming since he was nine years old. His latest project? A new app from Forward Movement, released this week—just in time to become part of your Lenten devotion. 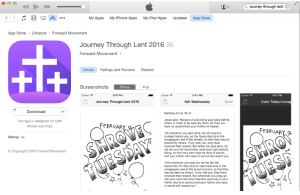 The app, Journey Through Lent 2016, brings Forward Movement’s popular Join the Journey Through Lent daily coloring calendar to the digital world. The app provides daily images and reflections illustrated by award-winning cartoonist Jay Sidebotham, offered alongside daily Eucharistic gospel readings, a space for journaling, and the option to add color and share your images.

“Jack approached us about building a Lent app based on work he had done previously. He is a talented programmer and he was a delight to work with,” says the Rev. Canon Scott Gunn, executive director of Forward Movement.

How does such youthful ambition begin? “My mom was a software engineer and introduced me to programming,” says Whittaker. The teenager approached Forward Movement last year to see if he could help create the program. He enjoyed the process of creating the app—and the opportunity to learn more about Apple’s new technologies.

“I had no concerns about working with a fourteen-year-old,” said Gunn. “Jack’s communication has been professional, and his work is first-rate. He’s been terrific.”

The Journey Through Lent 2016 app is available now in the app store for $1.99 for iPhone or iPad. To learn more or download, click here.

Forward Movement is a ministry of The Episcopal Church located in Cincinnati, Ohio. Since 1935, we have produced resources to inspire disciples and empower evangelists around the globe.