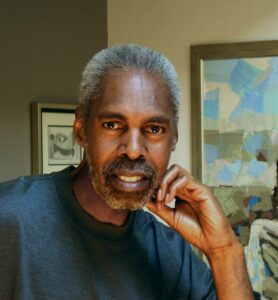 Today we spotlight the artist behind the striking cover image of Mark Bozzuti-Jones’ book, Face to the Rising Sun. Joseph Holston, an American artist, painter and printmaker, has been working in the fine arts for more than 40 years. The cover image for this book, Jubilation, is part of Holston’s visual narrative “Color in Freedom: Journey along the Underground Railroad.”

I hope [the Color in Freedom series] resonates with viewers everywhere, as the world continues to grapple with people who, escaping from whatever chains bind them, seek freedom and opportunity to live their lives. 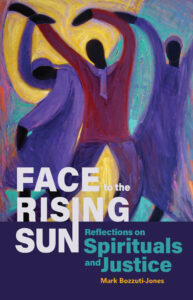 This image made a great fit for the cover of Face to the Rising Sun, rooted in the deep faith of African American story and the celebration of the Black spirit. Fittingly for a book centered on justice, Holston’s fee for use of the image was donated, at his request, to two local charities: the Manna Food Center and the Maryland Food Bank.

Read on to hear more from Holston about his background, his art, and his work on this book cover!

What is your background in art?
I have a very non-traditional art background.  I knew from the time I was a very young boy that I wanted to be an artist, but as a black child growing up in what was then a rural Maryland community, I had no role models and no meaningful way of knowing how to reach my goal. I loved studying and copying the work of artists like Norman Rockwell, from the cover of the Saturday Evening Post, and loved it when my elementary and junior high school school teachers enlisted my help on art projects. When our family moved to Washington, D.C., I learned from a friend about a high school with a two-year intensive program in the field of commercial/advertising art. I applied and was accepted into the program, and as they say, the rest is history. As part of our training, we visited many of the museums in Washington, and I spent hours studying and copying the works of the masters. The National Gallery of Art and The Phillips Collection were and still remain among my favorite museums, because they were so instrumental to my development as an artist.  My strongest artistic influences were Rembrandt, Matisse, John Singer Sargent, Renoir, Romare Bearden and Jacob Lawrence.

After graduation I worked in the commercial art field for about seven years, while continuing to study fine art painting and drawing independently. After a summer session studying painting with Richard Goetz in Santa Fe, New Mexico in 1971, I decided to leave my job at a small graphic arts firm, to focus exclusively on building my career as a fine artist. I learned printmaking working with Professor Winston Kennedy at Howard University, who allowed me to observe his class, even though I was not an enrolled student. I purchased my own etching press in 1973.  Although many in academic circles dismissed me as “self-taught,” there were others in addition to Professor Kennedy, like Professor and artist James Wells, Professor and artist Lois Mailou Jones, who encouraged me.  My first solo museum exhibition was at the Butler Institute of American Art in Youngstown, Ohio, in 1973.My color palette starts with one colorful image “Protection”, and quickly moves to the dark tones and colors that symbolize captivity, transport and delivery into slavery.  From that point, the color palette of each subsequent movement also represents the stages from captivity through escape and freedom, ending with the bright, vivid colors of the final movement, representing “Color in Freedom.”

Tell us about the Color of Freedom series. What inspired this series of paintings?
In 2007, I was invited by the University of Maryland University College (now the University of Maryland Global Campus) to have a second solo exhibition in their Fine Arts Program Gallery. (My first solo exhibition there was in 1993.) The idea of creating an exhibition based upon the theme of slavery and the Underground Railroad, came from a brainstorming session with friends and university arts program officials. As we discussed it, the idea grew into an exhibition, a published book, a university symposium, a teachers’ guide for Maryland public schools, and more.

Once the decision was made, I studied the subject extensively and even walked an Underground Railroad trail in the Maryland area. I needed a way to organize the subject matter, and, as a lover of classical symphonies (I always listen when I am creating in my studio.), it made sense to structure the subject matter like a symphonic work:

My color palette starts with one colorful image “Protection”, and quickly moves to the dark tones and colors that symbolize captivity, transport and delivery into slavery.  From that point, the color palette of each subsequent movement also represents the stages from captivity through escape and freedom, ending with the bright, vivid colors of the final movement, representing “Color in Freedom.”

Where does Jubilation, the cover image for this book, fit into the series?
Jubilation is from the 4th Movement, and is meant to represent the celebratory elation of freed slaves. Other works in the final movement, like Sun Warms the Freemen, were also created using much brighter colors. The final work in the series, Responsibility of Freedom, is meant to convey happiness that is tempered with recognition of the long road ahead.

What do you hope viewers take away from your series?
Although Color in Freedom: Journey along the Underground Railroad is intended as one artist’s interpretation of a period in American history, I hope it resonates with viewers everywhere, as the world continues to grapple with people who, escaping from whatever chains bind them, seek freedom and opportunity to live their lives. In 2010, I was privileged to exhibit Color in Freedom: Journey along the Underground Railroad in the Palais des Nations at the United Nations in Geneva, Switzerland. I was especially moved to see the way in which people from all over the world responded to the works.

Face to the Rising Sun is a book of reflections on African American Spirituals. Do you have a favorite or most memorable Spiritual?
Although “Goin’ Home,” which was written by William Arms Fisher, and which uses the theme from Czech composer Antonin Dvorak’s New World Symphony, is not a Spiritual in the traditional sense, it was, according to Dvorak, inspired by a gospel hymn.  I love its poignant theme, and, to me, it is reminiscent of some of the best traditional spirituals.

Is there anything else you’d like our readers to know?
Only that it is an honor to be associated with this work by Rev. Fr. Mark Bozzuti-Jones, and I hope that he and I have an opportunity to meet some day.

To see more of Holston’s art, visit his website at holstonart.com.