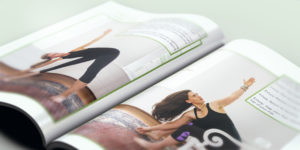 Amy Nobles Dolan and Hillary D. Raining share a mutual passion for yoga and for faith, which brought them together to write Faith with a Twist.  Amy is the owner and head teacher of Yoga with Spirit, an ashtanga-based yoga studio in Wane, Pennsylvania. She is also a yoga writer who publishes a weekly blog and has helped edit a yoga anatomy book. She is married to her college sweetheart, Jim, and has three young children, JB, Katie, and Sally. Hillary is the rector of St. Christopher’s Episcopal Church, Gladwyne, Pennsylvania. She also teaches yoga and plays piano, classical violin, and Celtic fiddle. She is author of Joy in Confession, published by Forward Movement. She is married to Ken and they have a daughter, Delia.

When and how did you begin practicing yoga?
Hillary: I truly started practicing yoga in earnest in 2010 when I won 5 free yoga classes at Leigh Valley Yoga studio in Bethlehem, PA. To be honest, I had always thought of yoga as too “easy” to count as exercise, but was proven wrong when I left feeling totally exhausted after my first class! I was hooked by the way my mind was calmed by the vigorous and meditative practice and found my prayers were deeper at the end of just one session!

How has yoga influenced your life?

Amy: Yoga began as a hobby. An hour of “me time” in a life consumed by taking care of children, husband, pets, and home. Within months, dear friends were commenting that I seemed different – happier, contented, less stressed and anxious, mellower. It was profound validation for me to know that the differences I was feeling in myself were actually noticeable to the people in my life!

I believe that yoga has made me a better mother, a better spouse, a better friend, daughter, and sister. I guess you could say I think yoga has helped me become more like the person God created me to be and that I yearn to be.

After practicing yoga for three years, I enrolled in teacher training and have been teaching ever since (about 15 years). I opened a studio called Yoga With Spirit and am blessed to share this practice with dozens of students each week. So yoga has completely changed my life in that it is now my work as well as my passion.

How have you seen yoga transform someone else’s life?
Amy: As a full time yoga teacher I see this practice transform people’s lives all the time. It is amazing!

One of my students who dove deep into the practice totally revamped her life. She started small by cleaning out extra “stuff” at home. She started to pay attention to her daydreams which all involved living near the beach in southern California. Over the course of the two years that we worked together, she put in place and executed her plan to sell most of what she owned, move out west and start a simpler, new life. She has never been happier!

How did the idea for this book develop?

Hillary: This book developed from a combination of ideas centered around Amy’s amazing teacher training program. As a student of Amy’s I was encouraged to put together a project that would help take the yogic principles that we were learning off the mat and into the real world. So, I decided to create a Lenten meditation series around yoga’s “ethical code” of the yamas and niyamas. Meanwhile, Amy, who is not only an accomplished teacher but also a gifted and prolific spiritual writer, had developed a manual for those who were looking to delve deeper into their practice. We knew we wanted to work on a project together born out of our friendship and mutual faith and love of yoga. Thus, we blended the two projects and Faith with a Twist was born!

What was your favorite part of writing this book?
Hillary: I would say working with Amy on a project we were both passionate about was a blast! It’s rare when you get to work on something you care about with a person you have such fun with.

What was the biggest challenge in writing this book?
Hillary: As a person who has dyslexia, the writing process itself is always the hardest part. That is why I am always so grateful for good editors! 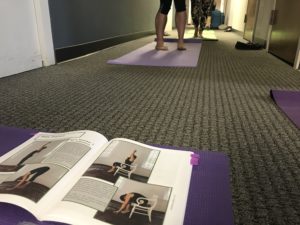 Amy: Hillary and I have worked very hard to convey how yoga and faith support one another. Rather than trying to blend the two traditions, which always dilutes both of them, we have tried to honor both the ancient spiritual practice of yoga and the Christian faith we share. We have not tried to make yoga “Christian” in our book. I, for one, do not believe there is such a thing as Christian yoga or Jewish yoga or Buddhist yoga. I believe yoga is a spiritual tool that supports and enhances any faith. In our book we have tried, instead, to show how yoga’s spiritual practices have supported and enhanced the contemplative prayer practices that draw us closer to God in our daily lives. And that is precisely what the founding teacher of Ashtanga yoga (Sri K. Pattabhi Jois) taught was the highest purpose of the practice…to focus on God.