Tim Schenck is on the Lent Madness Supreme Executive Committee, along with his archnemesis (and Forward Movement executive director) Scott Gunn. He is rector at St. John the Evangelist, an Episcopal Parish in Hingham, Massachusetts where he resides with his wife and two sons.

In your opinion, what was the most difficult Lent Madness match-up you’ve seen?
Well, they’re all difficult because the whole concept is absurd. I mean, saints battling saints? Come on! But perhaps the most diabolical first round match-up we ever concocted was in 2013 when Martin Luther squared off against Martin Luther King, Jr.

Which Lent Madness mug do you use most often?
I have a generic purple Lent Madness mug that I use a lot since, you know, I’m entirely nonpartisan about who wins. But I do keep the whole collection of mugs from years past stacked on a shelf in my office. Oh, and when Dietrich Bonhoeffer won in 2016, a parishioner who was a big supporter of his bought one for everyone on the staff at church. So we have a lot of those floating around St. John’s.

How was Lent Madness created—how did the idea develop?
It really started on a whim. I was tired of sports fans (of which I’m a big one) having all the fun during Lent with their brackets while church goers were left to eat twigs and engage in other penitential acts. So I came up with the idea to teach people about saints while injecting a bit of joy into the season. I though Lent could use a bit of a rebrand — it’s not supposed to be the church’s season of depression. I mean, what could be more joyful than a season specifically set aside to get closer to Jesus?

Who did you think was going to win the Golden Halo last year? 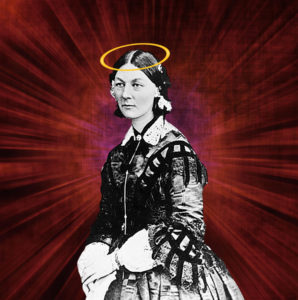 Believe it or not, I never fill out a bracket or make predictions. Partly because, like Supreme Court Justices, members of the Supreme Executive Committee must be fully impartial. But mostly because I am always wrong! Far be it from me to foretell the whims of the Lent Madness voting pubic.

What is it like working with your archnemesis?
Wait, I have to work with Scott?! Alas, we all have our crosses to bear. Scott is mine and I’m sure the feeling is mutual. Nonetheless, we issue a decree of detente each Lent to pull off the world’s most popular online Lenten devotion.

Have there been any big changes to Lent Madness since its creation?
Many! The most significant change came in 2012 when I partnered with Scott and Forward Movement. Once we moved voting off my blog and onto a dedicated website, we were truly able to bring voting to the masses and add beloved devotional aids like the Saintly Scorecard. Bringing on a full slate of Celebrity Bloggers that year was another big change. I did all the writing myself the first two years, which seems crazy now — I don’t really recall much about Lent 2010 or 2011.

What’s most amazing to me is that even as it has grown and evolved, the essence of Lent Madness has never changed. It’s still all about introducing some incredibly inspiring saintly souls to people and introducing an element of delight to the season.

What other Lent Madness swag would you like to see?
A private purple jet for the Supreme Executive Committee. And trucker hats. Who wouldn’t want a Lent Madness trucker hat?

What is the most difficult part of running Lent Madness?
See number five above. Actually, there are a few things. Like getting Celebrity Bloggers Brock and Sibley to hit their deadlines. But mostly it’s the intensity of leading my own  congregation through a meaningful Lent while also tending to the “mega church” that is Lent Madness. These parallel congregations (and there is a bit of overlap) deserve the most inspiring walk possible through the holy season of Lent.

What is the most fun part? 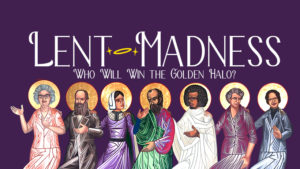 I’m still amazed at the pop-up Lenten community that develops in the comment section of each match-up. Let’s just say that most online commenting sections aren’t know for their…graciousness. The community that forms around Lent Madness is an exception. People share their very personal reasons for voting a certain way, give additional information about saints not covered in the bios, and offer genuine concern for the spiritual lives of one another. That inspires me and is a joy to behold!

Any special plans for year 10 (2020)?
Great question. A special commemorative mug? (duh). We will definitely give this some thought and any suggestions are welcome. Still shocked that we’re approaching a decade of this Madness.

Is there anything else Lent Madness participants should know about you?
Starting in March, I’m taking a four month sabbatical. I’m excited about it but am aware that the first month will overlap with the last month of Lent Madness. But don’t worry! I’m not taking a sabbatical from Lent Madness. I’ll be doing some traveling to Central America that month so Monday Madness may suffer from spotty wifi on occasion, but the show will go on. I’ll also be doing some writing and you can look for my forthcoming book on the intersection of faith and coffee titled, naturally, Holy Grounds (Fortress Press, Spring 2019).